… in which I almost matched the winner’s finish time

For some reason, I had been particularly nervous in the lead-up to this race – much more so than the Great Scottish Run half marathon (also in Glasgow) last October, for example. It struck me the day before the race, that I had lost more sleep, fretted more and generally been more sensitive in the preceding week, which begged the question – why?

The trouble with training for and running a 10K is that the focus soon becomes the time in which you run it, as opposed to the distance itself. And that translates to … suffering!

The morning of the race saw me with stomach butterflies. Before leaving, I had had a brief look at Facebook and quickly saw a couple of updates which indicated that the previous day’s Kintyre Way Ultra/Relay/Epic had been a great success for Dunoon Hill Runners. The pressure was now on to not let the side down with my small effort. On the way to Glasgow,  I stopped at Tesco to use their loo (sorry, Tesco – I didn’t buy anything) and I noticed how my hand was a bit trembly as I reached for the tap. How ridiculous, I thought. 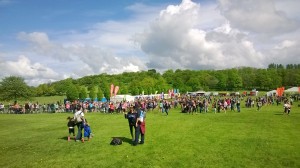 Parking at Ibrox was much easier than anticipated and I was pleased to see a large bank of portaloos in Bellahouston park (there were more at the start line too). It must be said that the Great Runs are all highly organised and provide more than adequate facilities. Being a women’s event too, the portapotties were clean and usable (no elbows required!). What a luxury.

Inspired by elite Scottish athlete, Susan Partridge, whom I’d just seen warming up (if you could call her fast pace a warm-up), I jogged over to the start line. When I’d originally received my race number in the post, I recall staring at it in an attempt to figure out what coloured wave I was in – my bib didn’t have a colour. Panic! Then I realised, white is a colour. This shocked me a little as I’d been far from the white wave in the Great Scottish Run. I therefore associated it entirely with very fast club runners. So I assumed there had been some terrible mistake which would result in me being swept along at sub 6-minute miles until the point of collapse (fairly quickly, I would imagine). The fact is that the women’s 10K has a bit of a narrower field, which bumped me up into the slightly scary world of white runners (so to speak). I noticed a certain glint in my fellow-runners’ eyes that suggested serious business. This was going to be no fun run if you were clad in a white bib.

As we assembled, listening to the thundering bass of the count-down “heartbeat” (seriously not helpful to the tense, nervous headache that I was developing), something caught my eye. It was a sign … quite literally. It read “50 min pacer”. She stood beside me. The sign taunted me. The heartbeat thumped. The gun fired. 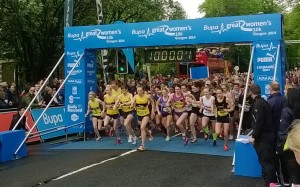 And we were off! Suddenly, I realised why I’d been nervous all week … this was the moment. I was going for sub-50 minutes! My watch was reading sub 8-minute miles … I could do this! Or could I? Gosh, it was awfully fast. And didn’t I know that the worst thing to do in a race is go out too fast? And hadn’t I not done much speed training due to injury? And wasn’t my heart rate reading a little on the high side? Never mind, I would stick with the 50 minute pacer lady like glue, if only she’d stop speeding up.

I recall the witty banter among the Great Scottish Run runners last year, the cheers from the crowd gratefully received, the drums, the pipers – I think they were all there on Sunday too, well apart from the witty banter (all I could hear was huffing and puffing from the serious white wave runners). Yet I wasn’t encouraged one iota by any of it. My only focus was 50-minute-pacer-lady, and breathing. On I ran, still keeping below the 8-minute mark, albeit barely.

Then something bad happened in Pollok Park at around 33 minutes. I would describe it in the classic terms of hitting a wall, or the wheels falling off, or blowing up. Physically, the tank suddenly felt empty and I had to resist the urge to walk/collapse/hail a taxi. How can this be happening, I wondered? My brain kicked in with the obvious conclusion – you went out too fast. You can’t run this pace. You are an idiot. Etc. Forced to slow down, I fumbled desperately with my water bottle and contemplated the embarrassment of a DNF. As I watched 50-minute-pacer-lady running off into the sunset along with my hopes and dreams, I discovered that I was actually still moving and that my revised goal was now to continue to do so. I might not set a PB, but perhaps I could avoid a PW (Personal Worst). Maybe I could even start to enjoy the race. It was only later, when I’d reviewed the information uploaded from my watch that I realised, I had been running up a hill (where had that come from?!). In addition, in contradiction to the weather forecast, the sun had come out and it had been really quite warm. It had been a very sweaty hill.

And so I trotted along for a bit, taking any small mercies that I could out of the situation. I became aware of a pacer passing me and despondently accepted that this must be the 55 minute one. To my astonishment, I realised it was not – it was my 50-minute-pacer-lady! How was that possible? Had I entered some kind of time warp? Or had she stopped to take her jacket off? I suspect the latter.

So we were off again! Like a greyhound after a rabbit (or more like a donkey after a carrot), I was infused with renewed hope as I chased down the ever elusive pacer-lady. The crowds cheered, the pipers played, the elephants danced (or I could have been hallucinating) all the way to the finish. I vaguely recall running past a bank of photographers and I summoned up a grimace, absolutely not giving a flying fig about how I looked in tomorrow’s Daily Record. It was all about survival now. 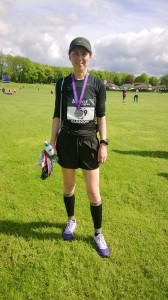 As I dared to view my cumulative time on my watch, my heart took a little dip upon realising I was not going to break 50 minutes, but would instead come heartbreakingly close. Indeed, my finish time was 50:35 … 35 little seconds between victory and total desolation. OK, I exaggerate. The truth is, I felt fairly content that I couldn’t have bettered that time. I left it all out on the course, as they say (at some point, I may go back and collect it).

Walking back to the car at Ibrox, Susan ran past us, warming down (does she ever stop running, I wonder?). The fact is that, at the exact time she was finishing the race in an astonishing 33 minutes 52 seconds, I was also almost finishing along with her – albeit at a slightly different point on the course. 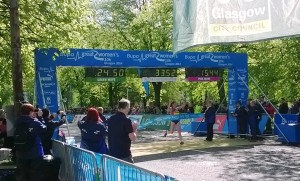 As I reflect on the race, it was rather special to be running alongside so many other female runners, and the impressive fitness levels made me raise my game, as did the well wishes received from my fellow Dunoon Hill Runners before the race. Thanks go to all! Sadly, I lost 50-minute-pacer-lady in the crowd, but I do owe her a big thank-you too 🙂