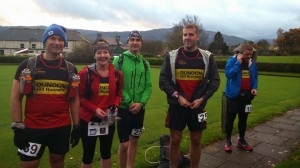 “That’s not good.” That’s how our day began and were the words that Jamie uttered quietly after we had just ploughed into a dead deer in the middle of the road (well, its torso) en route to the Glenogle 33 Ultra race! 6:50 am, dark and with my head stuck in the kit bag, we took flight then landed with a loud thud … silence … then we limped to the side of the road. Ricky and Kevin were next to hit the deer, quickly followed by Ian and Lisa who by this time had avoided a hit. So there we were, 6 DHR’s standing at the side of the road looking anxiously at Jamie’s poor Audi. Ricky asked, “What’s supposed to be in there, dude?”, as he pointed a foot at the holes in the bumper. Jamie replied, ”The lights!!”

After a brief check, “Are we all okay?”, it was decided to call the insurance company en route and continue to the start line. It’s never dull with us lot! Off to register we go, the weather turning out much better than expected. At registration, we followed a stream of runners of all different shapes, sizes and compression gear. With numbers collected and pinned on, we were set – the Dunoon Hill Runners were ready for action. Because of the deer incident we didn’t have much time for pre-race nerves and all too soon we were ready to run. A brief but relaxed and informal talk by the organisers, some nervous laughter and it was time.

The Glenogle 33 Ultra is an extremely relaxed race. Due to the bad weather the days leading up to it, it had been decided to turn the race route round and start from Killin running to Strathyre then back. Jamie and I had learned a few lessons running the Kintyre Ultra and decided we didn’t need drop bags but just to carry enough of what we both use and would require. The marshals were fantastic and so supportive. We met up with Nikki, a fellow runner who we became friends with on the Kintyre run. After a quick hug and catch up, we were off. The route is mostly trail through forest with a long stretch on a viaduct; there is a middle loop which takes you on the quiet B roads at Lochearnhead. There are amazing properties on this part and we had much admiration for different houses (we even spotted a lovely intact Audi similar to the broken one we had left sitting on the road side a few hours earlier!).

Jamie and I continued our tootle. It was all new to me but Jamie had already run this race twice before. We played cat and mouse with a few runners and ultimately set out to enjoy the race and finish. About mile 28, at the last check point, we met up with David, Jean, Bethany and Aimee. A quick cup of tea and more hugs then we were off again. Jamie decided at mile 30 that he had whiplash!! (Such drama). He also nearly didn’t make it to the finish as, when running over the viaduct earlier and out of nowhere, he said, “I wonder how many people think you are my mum”. He must have been wishing to end his ultra racing career at this point!! (Only 8 years older, I am ). We think we ran our fastest mile about mile 31, as we overtook a poor runner who I am sure thought we had completely lost the plot as we tried out the “Ricky Reid downhill manoeuvre”, leaning forward, arms by our side shouting, “Wheeeeeeeeee …!”. Then we were back in Killen, crossing the bridge and heading to the finish. Once again, Jamie distracted me and sprinted to the finish but, as in normal race finishes for us, was only joking and waited as we crossed together. Welcomed by our families and fellow Dunoon Hill Runners, there was many hugs and a lot of support. 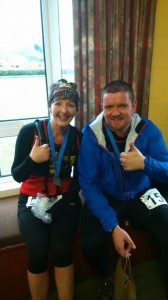 Morven and Jamie, happy to have finished

We had a fantastic run on the Glenogle 33 Ultra; it was full of beautiful scenery, excellent organisation and support from marshals and a fair share of other crazy runners. I have to say, we may not be the fastest runners in any race, but we love it. Finishing in a time of 6:42, we were delighted. Jamie has run this quicker on his own but he told me it was boring!! So I am just going to take his word for this. Fellow DHRs, Ian, Ricky and Kevin smashed the course in their fantastic fast times and did the club proud. It is an absolute honour for me to stand at any race start with these fabulous men and run the same race. I always feel a little emotional at the start and finish and would not be doing any of these races without the support and friendship we all have from our club. I also have to say I love running with Jamie. We have the maddest fun on all our races and really appreciate the fact we get to go off and have our ultra running adventures.

After all this excitement we had promised the children a Halloween party as we did not want them to miss out. So there we all were a few hours later, dressed in a variety of costumes and having our party faces decorated so expertly by little Rowan, not quite believing we had just run this race. To top it all, I won the lottery … all £25 which went towards a fantastic breakfast on the way home the next morning, the perfect finish to another Dunoon Hill Runner weekend away.

Ultra races may sound mind-boggling but, honestly, any one can run them. You train, you relax and set out on a new adventure, meeting great, like-minded runners on the way. It’s a great day out! Thank you everyone for sharing them with us, the next one is just round the corner!!!!!!