The combined brains of the 8 teams in attendance engaged in a hard-fought battle which tested on specialist subjects as well as general knowledge. In addition, a raffle containing lots of excellent prizes donated by local businesses contributed to the proceeds.

The evening resulted in a very impressive £1,140 being raised, which was subsequently rounded up to £1,500 by a donation from club funds. This amount was then split and cheques for £750 each were presented to the two charities.

Dunoon Hill Runners wishes to thank all the members and guests who contributed to these worthwhile causes, Dunoon Lodge 335 for the use of their hall on the night, as well as the many local businesses who kindly donated raffle prizes. 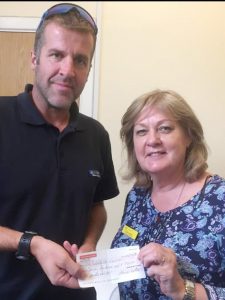 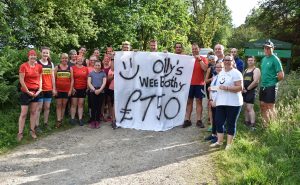 The Braes hosted Dunoon Hill Runners 2nd Annual Charity Quiz Night on the evening of Saturday 14 November 2015, which again was a completely sold out event! The club, now boasting nearly 70 members, enjoyed a fun-packed evening involving 20 teams all aiming to be crowned champions and, with last year’s winners present, it was going to be a close run affair.

After 2 hours and 9 rounds of hilarity – sorry, questions, plus the need for a tie-break question to split the top two teams, surprisingly it was the smallest team on the night that emerged the winners! Iain Cairns of Argyll Financial Services proudly stepped up along with his wife and in-laws to collect their prizes. Some would say his team had a distinct advantage as they had a retired geography teacher on board, given that Kenny Taylor who set the questions is also a geography teacher. Last year’s winners placed 3rd and, interestingly, they also had a geography teacher in their midst!

Teams also enjoyed a curry and their generosity was plentiful as they delved deep into their pockets to buy up large amounts of raffle tickets with over 20 prizes on offer, the greatest majority of which were kindly donated by local businesses who were nothing short of generous and supportive to the club.

The two charities chosen this year lie close to the club’s heart as both affect some of our members on a daily basis. The first charity chosen is Samuel’s Smile; it aims to help children diagnosed with rare forms of life limiting diseases. Founded by Samuel Bell’s parents, Samuel himself was born with an extremely rare disease called Total Interstitial Hirchsprungs disease and now at 17 years old is the oldest surviving person in the world with this condition. More information can be found here. The second charity to benefit is the local Multiple Sclerosis Society. Dunoon Hill Runners recognises that sometimes local charities can get lost amongst their bigger counterparts and, being mindful of this, we remain determined that monies raised would also benefit those locally affected. A grand total of £876 profit was raised on the night allowing the club to donate £438 to each of the two nominated charities.

Dunoon Hill Runners would like to extend their thanks to everyone who paid a ticket and attended the night; it is only through your continued support and generosity that makes events like this possible. We also wish to acknowledge all of the local businesses that kindly donated the raffle prize gifts, Argyll First, Bookpoint, Cothouse Garage, David Shields Joinery, Elite Clothing, Juno, Kennedy Chemist, Lorraine Community Fitness, Pink Fizz, Timothy Sharp Jewellers, Walkers Garden Centre and West Coast Motors. Thanks also to Jennifer and her staff at the Braes for their patience and great hospitality.

Dunoon Hill Runners is holding a Quiz and Curry Night at The Braes, 1 School Brae, Dunoon on Saturday 14 November 2015 at 7 pm.  Members and non-members are cordially invited to form a team or find a table. Ticket costs £8 per person. Half the ticket proceeds will be allocated to local charities, and the other half buys your curry. There will be lots of opportunities to win some of the excellent prizes lined up for the event! 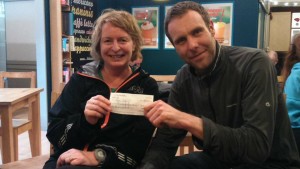 Dunoon Hill Runners were delighted to hand over our first club charity cheque of £325 to Paul Kerr for local charity, HappyDayz. The money was raised by all the Dunoon Hill Runners who took part in the 2014 Glencoe Marathon and Mamores Half Marathon.

It is fantastic as a club to be able to be part of such an amazing charity and we hope it helps to bring some big smiles.

A number of Dunoon Hill Runners will be running the Glencoe Marathon and Mamores Half Marathon on 5 October 2014. Each runner must raise a minimum of £100 for the full marathon and £75 for the half marathon and this will go to the race organisers’ nominated charity which is Project Northern Lights. We intend to raise this and anything over and above will go towards 2 local charities which are Happy Dayz and Arrochar Mountain Rescue.

This is a link to our online fundraising page where any donations will be gratefully received. Many thanks!