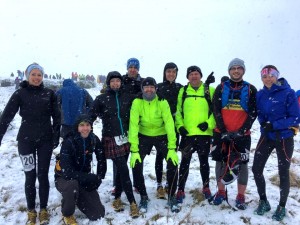 On Saturday the 13th of February 2016, eighteen intrepid Dunoon Hill Runners set off to attempt the infamous Carnethy 5 hill race. There was excitement, there were nerves, but little did we know that the conditions were going to make for an even more interesting afternoon on the hills.

This was my first ever hill race so I was nervous and unsure but I knew everyone was very encouraging and made me feel at ease. I had no idea what to expect but just went with the flow and hoped I would survive to tell the tale!

The journey consisted of compass lessons (yawn), map reading lessons and the general consensus that there is “no going back”. I think everyone was just buzzing for the disco bus!! 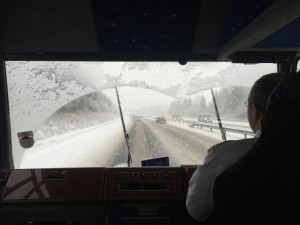 We had our first pit stop at Costa Coffee to catch up with the others and fill up with caffeine and buns. A short while later though, there was a realisation by some that topping up with coffee was not necessarily the best idea before boarding a bus that was lacking in the toilet department.

Penicuik was eventually found and we arrived at the school meeting point in thick snow, the biggest snowflakes I have ever seen. A foretaste of what was yet to come! Once I was race ready with my number and all-important Sealskinz socks (courtesy of Michelle), I actually realised that I had to do it.

Standing at the start line my toes were numb and the snow was falling thick and fast. The peaks were nowhere to be seen, completely hidden by a thick blanket of snow and low cloud. The lone piper created a fitting atmosphere before we set off like warriors, going to battle the 5 peaks. 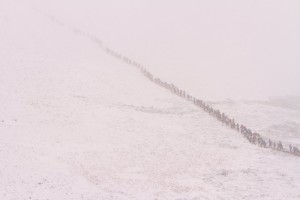 The ascent up Scald Law was intense. Below the hips everything was aching. My view wasn’t pretty as I followed other runners one by one in a line up the hill on a narrow snow covered path. The top of the hill was well hidden but I knew I had reached the summit when I was suddenly blasted by even more wind, hail and snow. Pretty nasty! Clare’s jacket had completely frozen by that stage!

I stormed on over the next few summits (the easy ones allegedly). At each corner I turned my sight was temporarily blurred from the mass of snow hitting my face. Sandy’s idea of bringing sunglasses was a good one after all! 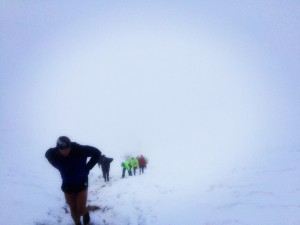 Credit goes out to the marshals, a large number were spread out across the hills (armed with ski goggles and their very best waterproofs). Giving out positivity and encouragement in those conditions couldn’t have been easy but I’m glad they were there. I would have been a big lost snowman without them!

I don’t remember every detail of the race – I was just concentrating on moving forward – but at one stage I found myself sliding down the hill on my bum. I wasn’t the only one! It seemed like the only way down at the time. It was great fun too!

I kept wondering when I would get to the last hill and only realised I had got to the top when I saw the tents in the distance. It was such a relief but I still had to get myself down the hill. This was more challenging than I’d imagined. The faster runners had already loosened the rock so it was only a matter of time until I landed on my backside! Several falls later the hill levelled off and I could see the finishing flags. I was so happy! I got through the bog and over the finish line with a big smile 🙂

There was an incredible amount of effort put in by all runners. We had 8 new to the race including myself, Roger, Sandy, Clare, Christopher, Ali, Charlie and Grant. Four runners (Ricky, Lisa, Kieron and Kirsty) even managed a PB despite the Arctic conditions. Although unable to finish the race, Ali reached the Arctic summit of Scald Law. I admire her determination and think she is a fantastic role model! First Male and Female were Grant and Lisa – so speedy, everyone was just brilliant! 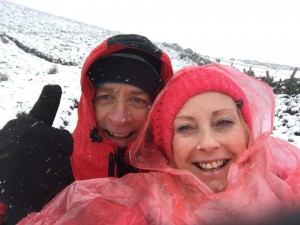 Our very own DHR support crew – Kenny and Michelle were there from start to finish and a very important part of the team. Fortunately, they left the pom poms at home but they did manage to safely protect Kirsty’s Sloe Gin which proved to be a very important and much appreciated post-race medicinal potion. They even managed to avoid the temptation of a quick trip to Harvey Nicks in Edinburgh whilst guardians of Roger’s wallet. Although, perhaps he should wait until his credit card statement arrives!

The bus home was a great laugh and included some well-deserved beverages. Bryan, Ricky and Kieron managed to persuade Coach, Roger and Charlie to stay out for a few more. I was just disappointed that there were no disco lights 😉 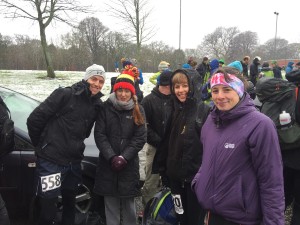 It is hard to put into words how much I have loved being part of such a supportive and encouraging club. Morven has been like my Running Mum from day one, always looking out for me. Lisa too, always giving me great advice. I feel like part of a large family 🙂 Well done again everyone and thank you to each and every one of you for making my first race really special. It turned out to be an amazing experience and I cannot wait to continue this hill running adventure!

See you next year Carnethy. A bit of sunshine wouldn’t go amiss – please? 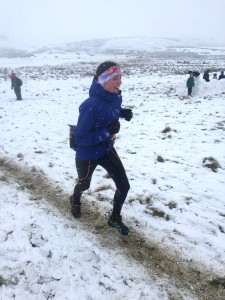