Now in its third year the ATR, organised by AdventureZone Scotland, is a 13.8 mile off road trail race. The route follows the historic Antonine Wall. Conveniently, the event starts and finishes at Croy railway station – a twenty-minute drive from Glasgow making it accessible by car and train.

This was my second time running the event. Last year I ran with some work colleagues and knew very little about what to expect. Fairly new to trail and hill running it was fair to say I was slightly apprehensive about what to expect. Standing there on the start line I was totally out of my comfort zone in my shiny new trail shoes which stood out like a sore thumb amongst the hordes of muddy and well trodden Salomons.

I start by mentioning last year as the ATR is a sort of starting point in my off-road running obsession. I remember the race well, particularly the fact that I exceeded my own pre-race expectations and that we exchanged positions for most of the race with a tattooed guy with an epic beard in Roman Gladiator sandals. I remember being in equal parts puzzled and curious about the guy with the distinctive appearance who was apparently breezing the race in sandals. I had read “Born to Run” whilst travelling that summer and knew a little about barefoot running, but it was a surprise to see sandals on what I expected to be a very rough and technical course.

Anyway fast forward twelve months and I’ve now run a number of off-road races, including the recent Glencoe Marathon. In fact this year I have run as many off-road miles as I have on the tarmac. I’ve also met the aforementioned bearded, tattooed and sandal-clad runner who is now well known to me as Graham Kelly. We’ve crossed paths at numerous races, while I’ve been out training hikes with some of my pupils and at this year’s London Marathon. As it turns out we are also both regular runners, and beer drinkers, with the Westies Cross Country Running Club in Glasgow.

So back to this year’s ATR race. It was run in fairly awful conditions with all 200 runners huddling under a family-sized gazebo pre-race to listen to the race briefing before setting off. The first two miles follow the golf course along a narrow path that does not permit passing. Remembering this from last year I tried to place myself in the pack but probably went about 20 places ahead of where I should be in a very strong field. So I found myself running too fast early on but it was difficult to fall back so I decided to ease back at mile three. This coincided with monsoon rain conditions that had me considering whether a walk back to the train station for an early bath would be an appropriate course of action.

Negative thoughts were buried to the back of the mind and I carried on. Thankfully the rain died away to a more gentle ‘lashing it down’. The first ten miles of the race are net downhill so it is easy to get carried away as you run through Kelvin Valley before approaching the town of Twechar. However any thoughts of speeding up were curtailed around mile 8 on the approach to Twechar by the 100 metre swim section – a new addition this year – thanks to the previously mentioned monsoon rain waters. Knee-deep wading at the foot of the valley gave a good chance to take a breath before the first climb up the forestry trail behind the town. This is the first of two small climbs on the route – cruelly both ascents are placed in the last few miles of the race.

A short descent follows the first climb before a steep climb up Croy Hill at mile 12. By this time I realised I was on track to match last year’s sub 2 hour finish, not bad considering Glencoe and the Cowalfest ‘mountain’ races had drained my legs in the last fortnight. I gleefully tore down the other side of Croy Hill and along the now swamp-like narrow trail at the golf course to finish in 1 hour 57. A good run in dreadful conditions. 13.8 miles is a real mind messer for the road running side of my brain and I again found the last half mile much tougher than it should have been due to my obsession with the magic numbers of 13.1 and 26.2. 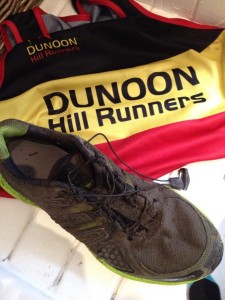 Overall I really enjoyed the ATR and would happily recommend it to others. My now well trodden Salomons coped well. However, I’m not quite ready to run the race in a pair of sandals. Speaking of sandals, I bumped into Graham again at the end of this year’s race. He didn’t run in his sandals this year but being back at the ATR reminded me how my running tastes and preferences have changed over the last twelve months since my first visit to the Antonine Wall. Graham’s inspiration for ‘barefoot running’ comes from the Tarahumara. He has taken part in the Tarahumara Ultra Race outlined in the book “Born to Run”. Who knows, maybe one day the Dunoon Hill Runners vest will make an appearance there – I’m working on Lisa to see if Mexico can be considered as a honeymoon destination.