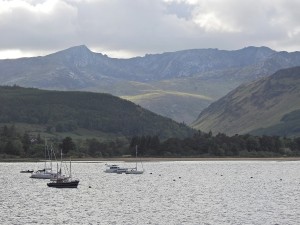 At the start of this year my running goals were vague. I had some fuzzy, formless ideas about maybe revisiting races I’d done before and bettering my times, but was not giving serious thought to increasing race distance. I’m not sure why this was, other than I’d decided to be cautious and sensible and to know my limits. And then I got injured – a painful gluteal tendinopathy that saw me limping to Elaine at Cowal Physiotherapy for help. Being duly cautious and sensible, this downtime afforded me the perfect opportunity to focus on what I needed to do to strengthen up, rebuild slowly and … enter a marathon! I guess something about not being able to run made me want to run more, if you follow.

And so it seemed like a sign when Club Secretary, Kenny, posted up the 2015 Arran Marathon on the DHR Facebook page. It certainly got my attention as I read about this inaugural race, occurring in the midst of the Arran Man Triathlon, based in Lamlash in June. Images of beautiful seascapes and mountain backdrops, and me dashing through them, filled my mind as my finger hovered over the “Enter now” button. But no, let’s not get ahead of ourselves, I thought. Instead, before making any rash commitments, I decided to embark upon a marathon training plan just to see how far I would get with it.

Time marched along and my weekly long runs became longer. I set myself checkpoints. Once I got to 18 miles, I would sign up. But I’d done 18 miles on trail – so maybe 18 miles on road then. Or maybe wait until 20 miles, and so on. I’d casually mentioned to a few fellow DHRs that I was thinking about entering. It wasn’t until Club Treasurer, Morven, subtly posted the link to the race entry form on my Facebook wall that I finally, at last, caved in and signed up. I’d also been following Kristine’s training for the Edinburgh Marathon and, upon seeing her success, felt inspired to bite the bullet. 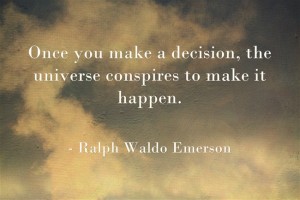 I might go as far as to say that the week of the marathon was worse than the race itself. I’m not a control freak, but so many out-of-control variables were running circles around me, my head felt ready to explode. The longer range forecast had hinted at the possibility of a heatwave moving in (well, some high pressure at least) which would mean certain death (I do not do heat). Then the forecast changed to “unsettled” which (in my mind) meant the ferries would be off for sure. Then it was going to be calm. Then, nope, back to stormy. Sleep became elusive. The tiniest, barely-there, niggles during my tapered down short runs became potential stress fractures. The ferries threatened to strike. Other nagging doubts took hold: had I trained enough? Had I done enough yoga/strengthening? Had I eaten the right food? Dear god, I don’t remember doing a 16 mile long run – how could I miss that?! Etc.

As race day approached, I was left with one choice – to let go. Wouldn’t you know, I slept just fine, the weather was fine, the ferries were fine, and the planets aligned. It was all very simple now – just show up and run.

It was a very busy ferry over to Brodick as I tried to pick out my fellow marathoners from amongst the lycra clad, cleat-wearing hordes of cyclists. A bus awaited us at the ferry terminal but, as it was for runners only, I wasn’t the only person who opted to stick with their spouse/family and use public transport for the short journey to Lamlash. The sun came out from behind the clouds and I had a last fret over how roasty-toasty it might be out on the course. We registered on Lamlash Green and received a quick welcome talk from the event organiser wherein he declared that the course was all ready and “pancake flat”. I tried not to feel too self-conscious about wearing my hill runners vest. Being an inaugural event, it was a small field of under 50 people, with various running clubs represented.

It was interesting to note the reaction to my DHR vest from marshals and other runners. No longer am I asked about who this upstart new club is. Now I am informed of previous encounters with other DHRs who are apparently popping up all over the place (confirming that our plans for world domination are apace). 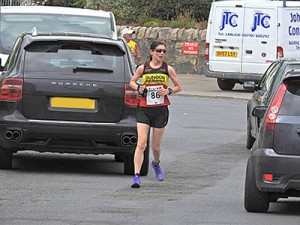 Lamlash was busy at times!

Emotions ran high as the countdown commenced (something about the start of a race makes you feel vulnerable), and we were off at 12.30 pm sharp. The route headed south before veering south-west and on to a clockwise loop through the lovely Arran countryside. High spirits and banter prevailed as we set out as a pack through back streets and farm yards. The tiniest couple of blips represented the only climbing as we ran partly on trail (as a DHR I was naturally all over this) then through more back streets to Lamlash Green before heading north-east for an out-and-back along the shore road. Helpful, cheery marshals directed us throughout the route and a feed station appeared just before the shore road petered out on to a beach trail. 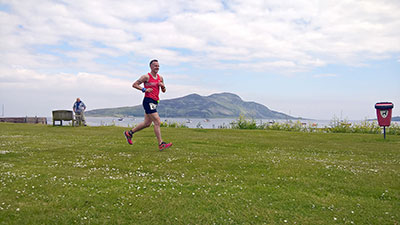 After a bit, we turned around and headed back to the starting point at Lamlash Green. Basically, this lap was repeated 3 more times, so we knew exactly what lay ahead. Alan was positioned on the green with my own fluids, gels and energy bar supplies, although I recall water and gels being offered by many a marshal too, including at the aid station also on the green.

Things became a little tougher on Lap 3. Little aches took hold and the doubting voices in my head grew louder. 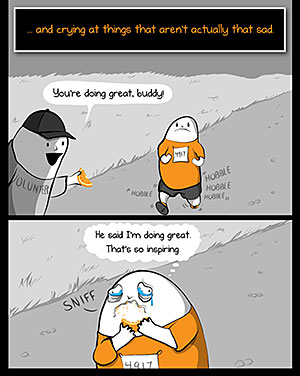 Emotions returned. I became tearful at the blackbirds singing, at the lovely horse on the hill, the “Well done” greetings of passing fellow runners and the encouragement of the marshals. It was all too beautiful/awful. “Dig deep” became my mantra as I became aware of the fact that a few of the runners who had passed were actually lapping me. I then became aware of the appearance of a very different sort of runner on the course. The sleeveless tops, the helmet hair, the 1000 yard stares … it was the Ironman distance triathletes. Not content with running a marathon, they had preceded it with a 2.4 mile swim (starting at 6 am) and a 111 mile bike ride. If there is “magic in the misery” (to quote famous ultra-runner, Dean Karnazes), then this was flaming Disney World.

I soldiered on. A moment of transcendent bliss occurred upon Lap 3 at the shoreline feed station when the marshals coaxed me into sipping Coke. A sip became a chin-wiping guzzle – nectar of the gods!! It made me almost look forward to Lap 4 for my next slurp. 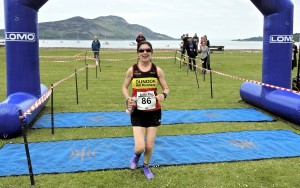 I’d wondered how 4 laps would affect me psychologically, and I can say that the infamous 20 mile mark, when many a marathoner allegedly becomes derailed, was made easier by knowing that I simply had to get myself through one more circuit. I said my farewells and thank yous to the blackbirds, the horses, the tourists, the marshals as I went, had my last gulp of Coke and aimed for the finish line where hugs, relief and ecstasy (the feeling, that is) awaited! 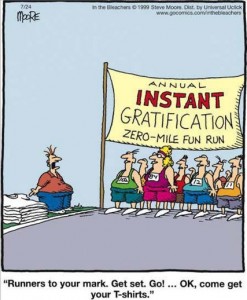 A t-shirt was presented to all finishers, although there were no medals. I think the lack of medals is possibly slightly less of a surprise to triathletes than runners, when every egg and spoon racer gets one these days. Yes, I was a teeny bit disappointed, but it caused me to consider what really matters in a challenge such as this and it’s so much more than a bit of bling at the end. I am happy that the money was spent on the organisation of a wonderful event that I will never forget. I would anticipate that, if the Arran Man events return in the future, the numbers will only increase as word spreads of excellent races in an incredibly scenic location. I certainly hope it goes from strength to strength. 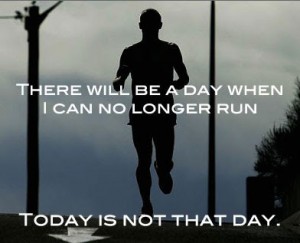 Now, a few days later, I thought I’d be wallowing in slothdom and relief, chuckling at the prospect of not having to run anywhere in particular any more, but instead I’m feeling a bit lost and bereft. Precisely 6 years ago (almost to the day), I was diagnosed with MS. At that point, it is safe to say that I didn’t envisage that I’d ever run a marathon. I am ecstatic to report that I now have – and I very much want to keep going. As I eye my old scribbled-on training plan and follow the DHR chat on the many forthcoming races, the same voice that told me to dig deep is now asking – could I do it all again?

Thank you to everyone who made it possible.