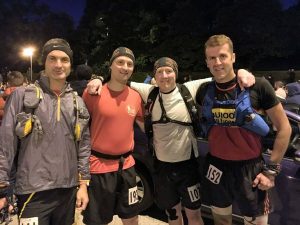 In a moment of madness I entered the West Highland Way Foot Race, which consists of 96 miles of hill and trail. I had never run anywhere near 96 miles throughout my training and on 18 June 2016, the day of the race, I was filled with doubt that my legs would carry me through the next 2 sunrises. My attempts to convince my fellow comrades Ricky Reid, David Wilson and Kevin Nairn that I wasn’t sure if I really wanted to do this fell completely on deaf ears!

As the start bell rang at 1 am, and with the tremendous support of family and friends, all 201 runners from all around the world excitedly set off into the night towards the first stop, Balmaha. At this point I was thinking, “It’s OK, Richie, you can pull out of this any time you like”. It wasn’t long before I watched the sun rise over the picturesque Conich Hill and I descended into Balmaha. I was feeling good but remained mindful that I had the same distance to do another 3 times over and the route was only going to get tougher.

Pressing on to Rowardennan, the terrain and miles weren’t the only battle, the midges became intolerable. There were clouds of them and not even the elite racers could out-run them! It was a tough section as the pesky midges remained an unwelcome distraction all the way to Inversnaid.

Beinn Ghlas was a welcome sight and this is where I was met by my incredible support crew including my wife, support runners and our amazing local physio Elaine Graham of Cowal Physiotherapy, who strapped up my knees as they were beginning to ache. After a bit of grub, I hit the trail once again.

51 miles had passed, another 45 to go, and I met up with my first support runner, Linda Good ,who helped me push on to Bridge of Orchy to meet Lisa Marshall, my second support runner, who kept my spirits up with her good banter.  By this point I had developed the mother of all shin splints and I knew from here on in there would be little running. Having made good progress until then, I could theoretically walk to Fort William within the required timescales but I knew my success would depend on a positive mindset. On arrival at Glen Coe Ski Centre, 71 miles in, I was greeted with a much longed for fish supper, and the queen of pain relief, Elaine, worked her magic on me again! 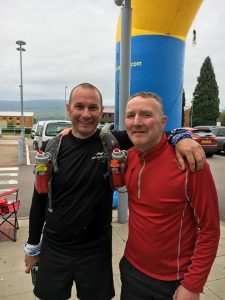 Night was creeping in and I was down to my last section, only a marathon distance to go! I knew if there was ever a man who would get me through this next section it would be Ian Marshall who was my third support runner. My calculations were indicating that, at my current pace, it would be 9 hard hours incorporating the infamous Devil’s Staircase and the climb out of Kinlochleven before I passed that finish line. It was a daunting prospect because by now every step was painful and slow.

Through the night, going over the Devils Staircase and down into Kinlochleven tested all my mental and physical strength and, with the sun rising for the second time, I had 14 miles remaining. From here on in my memory is vague, mostly due to lack of sleep but what I do remember is that I spent my time concentrating on simply putting one foot in front of the other.

The last few miles were on tarmac. It was relentless but the extreme exhaustion I felt was soon replaced with euphoria as I was met by the cheers and support of Dunoon Hill Runners as I crossed the finish line in Fort William at 7am.

Would I do it again? Absolutely! But not next year!