I guess it all started in a conversation with Iain Cairns…. 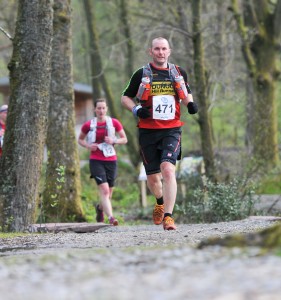 I had not long completed the extreme Ironman race City to Summit, I had been mulling over what new challenge to set myself. Before I knew what I was letting myself in for after listening to Iain’s ultra tales I had pressed the enter button for the HOKA Highland Fling “What had I just done?!!” It was 53 miles of trail running along the famous West Highland Way starting from Milngavie and finishing in Tyndrum. 53 miles!! I remembered thinking 53 miles! 53 miles!!!! The longest previous run I had done was 27 in the Ironman event and to think I’d have to do that all again, why had I listened to Iain?! 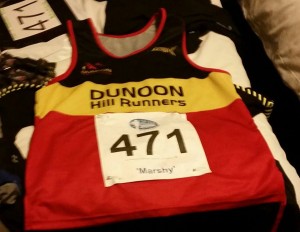 The decision had somewhat coincided with starting up Dunoon Hill Runners and my fear of never managing to push myself to that sort of distance quickly evaporated as the weeks went by and the club grew and grew. I guess in truth I was feeding on everyone’s enthusiasm and motivation for the races they were preparing themselves for. This is what helped me the most, joining up with new friends and old alike, running the trails and hills around Cowal, these guys were an inspiration, none more so than Walshy (sure he hasn’t been called that since school lol). 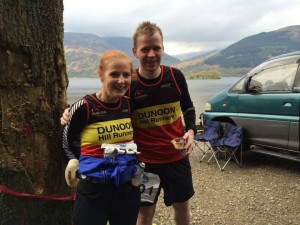 On the evening before Lisa and I arrived in Glasgow, Lisa who also had entered had struggled with injury early on in her training yet decided with a push to run the first 27 miles of the route and then bail out. Given her most recent long run of 21 miles, a sensible option… I don’t tend to get too nervous about races however Lisa made up for this as she was more excited and nervous than a child on Christmas Eve! We or should I say I prepared our drop bags and got all our kit sorted, forecast wasn’t looking too bad for the morning. 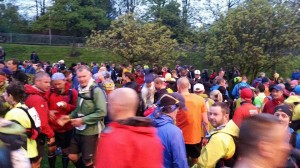 At 5.30am we arrived at Milngavie along with 600+ other runners, meeting up with Iain Cairns, the atmosphere was tangible and I was soon scoping other runners kit taking note for my Christmas wish list  As usual every single person there looked fitter than I did and that was my one and only brief negative thought “what have I done?!” laughing inside rather hysterically.

The claxon sounded and we were off like well disciplined ants following the road out of Milngavie and onto the West Highland Way. The field spread out much quicker than I had anticipated and I soon lost sight of Lisa and Iain, unbeknown to me they were not that far behind. 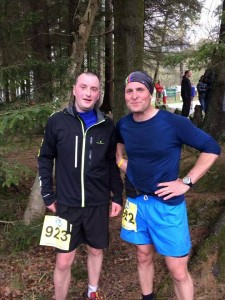 Thirteen miles in, arriving at Drymen, I first spotted the ever cheeky and enthusiastic Ken Clark as he bore down on me with his big lens! Then a cheer from Kenny Taylor who I later found out was disappointed to see me in shorts! As we crossed over the road David Wilson (Pup) and David Walsh (otherwise engaged in the portaloo) were waiting on their respective relay runners. I was feeling good at this point and muttered a quarter of a way there to which I heard a reply “he’s optimistic”. I was soon to realise just exactly what those words meant…

Conic Hill was the first challenge of the day and like so many others found myself walking up it to conserve energy for the rest of the race. Disappointingly it was very misty and it wasn’t until descending over the other side did the mist clear and we were afforded stunning views over Loch Lomond. What would normally be a straight forward descent for me was turning into a hardship and it was at this point I realised I was not having a great run. I think we always hope on race day that everything will click and it’ll be one of those effortless enjoyable runs, however this was not the day.

By the time I arrived at Balmaha I was feeling pretty done in, that was 21 miles in with another 32 to go! I knew the next 15 miles having recce’d it with Iain Cairns earlier on in the year and felt it should go well however at the next check point Rowardennan, mile 27 I was struggling. Silke, local GP and Glenpark Harrier was there to greet me and following a stern talking too, told me to ease back. Five minutes later and having fuelled up I set off at a slower pace, aiming to recover enough that the next half would be doable.

I arrived at Inversnaid feeling much better, the slower pace and the more technical terrain brought my heart rate down and the 7 miles passed relatively quickly. I felt a surge of confidence only 19 miles left….. what was to come though can only be politely described as horrible and I confess I had moments of dummy spitting and toy throwing out of the pram! The section between Inversnaid and Beinglas Farm just served to take away what little energy I had left in my legs. Remarkably though I still felt better at mile 41 arriving at Beinglas Farm than I did at mile 27 and I was also told that Lisa had continued on beyond Rowardennan! The Glenpark Harrier girls were there again to greet and assist me and even offered me a massage! It was here I knew I was going to finish and looking at my watch I’d even managed to maintain a reasonable pace but the legs were beginning to hurt.

Leaving Beinglas I ran alongside a guy from France, originally from Scotland, I guess a good ten years younger and adorned in full Salomon kit, we got on great, good chat and sharing in our pain when from nowhere that little competitive voice jumped in my head and said “come on Marshy you can’t let this guy beat you”. Seriously I thought I have 10 miles to go, completing what would arguably be the greatest physical challenge I’d ever done and I’m challenging this guy to a race and he was completely unaware of it! Even so I couldn’t help myself and I pushed on and dug deep eventually shaking him off and from somewhere I found the energy to run all but the long climbs, even catching a few guys on the descents whose quads were obviously destroyed. The last 3 miles approached as I came off the hill when the arch of my left foot either strained or went into cramp, whatever it was I was in pain. I realised I was on for a sub 11 hour race, previously aiming for sub 12 hours, I recall Ken Clark at the farm with 2 miles to go snapping away with his camera, I barely felt I could muster a smile.

Soon I could hear the faint sound of bagpipes in the distance, knowing that I was close to the finish line, rounding several corners the ground opened up to a huge long red carpet with a massive inflatable arch at the end. The carpet lined both sides with supporters cheering encouragement, suddenly all the pain and stiffness evaporated and I crossed the line in 10 hours 55 minutes. Thirty seconds later the pain returned, my legs turned to cement and as our supporters will testify I was walking like a dog that had just been neutered! Still I managed to make the beer tent! Never again I thought, seriously that was the hardest thing ever…….. 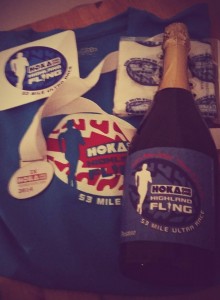 The HOKA Highland Fling is a must do race for any Ultra runner or aspiring Ultra runner. I have raced many events over the past 4 years and this was without doubt the best as well as the hardest but don’t let that put you off! It’s achievable, the organisation, the support along the way, the atmosphere, the grand finish that makes you feels like an Olympian and not to mention the goody bag… technical t-shirt, buff, bottle of Prosecco and a medal all for £32 entry! Some of us even got a wind cheater jacket (you know who you are!!).

Three days later the pain and stiffness had gone and I was beginning to contemplate which Ultras I would like to do next so honestly it wasn’t that bad…. Thanks to Ken Clark Photography and Ronnie Cairns Photography, the Glenpark Harrier girls, Lynda Nairn for her cake at the end and my ever reliable friend David Walsh for driving me back home. Got to say it, I’m proud to be part of Dunoon Hill Runners!