This was marathon number 5 for me and I can safely say I have never learned from any previous mistakes and will catalogue a few of the key mistakes that were made this time round – and for anyone reading this my advice would be to do completely the opposite of me.

After several miserable attempts at running a marathon under 4 hours I achieved a 4:02 last year. My wife has accompanied me in each of these attempts and was becoming increasingly annoyed at having to hang around at the finishing line from 3hr 50mins onwards for me to appear late, grumpy, sore and always suggesting I will never do such a stupid thing again as run 26.2 miles on tarmacked roads.

I of course recanted each time and in order to appease my better half booked a marathon in Rotterdam with the thought of bribing her with a weekend away.

The intention was to use this as my second last long run prior to Kintyre. My time target was around 4:10-4:20 nice and steady and enjoy the day.

Where It all went wrong – 12 points to avoid:

All that said I had a great day. The crowds are bonkers. They have your first name printed on your bib so everyone shouts encouragement and high fives as you pass. This was massively appreciated from the start to around mile 16. Around mile 18 the wheels feel off and the high fives were tolerated. By mile 22-24 any suggestion that “Jamie run faster” with a stupid Dutch accent was being greeted with pure anger. From 24-26.2 I adopted a run/hobble strategy. I was passed by the previously too slow 4:30 pacers and I was talking to myself with multiple combinations of the worst expletives. This strategy in tandem with my pained/manic expression helped to stem the shouts of encouragement.

The final insult was being passed at mile 26.1 by an octogenarian speed walker with a Lord Kitcheneresque First World War mouser and I could not even muster the pace to catch him.

As I crossed the line my only thoughts were to find the wife and chastise her for making me run and hope for major analgesia and sympathy. Neither of these things happened and I had to implement a post-race recovery strategy of beer and pizza.

We spent the Sunday night in Amsterdam. Our hotel was a 5 minute walk from the world famous red light district. Unfortunately a 5 minute walk was too much for me and decided to sit in a conveniently placed pub and continued my post-race recovery. 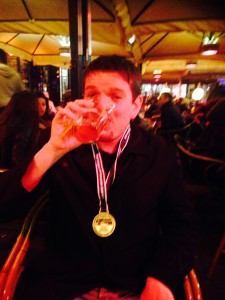 I knew beforehand that it was probably going to hurt. My ankle has never properly healed. There was a tolerable level of pain straight from the gun. It is probably the most pain I have been in whilst running. I did however genuinely love the experience and I am always amazed afterwards that my fat wee legs bounced along for 26.2 miles. I think I have lost another centimetre in height.

Running is a choice and not a punishment and although I will never set any records I feel privileged that I have the opportunity to participate in these events.

I am currently planning my next failed sub 4 hour attempt and think Loch Ness deserves another tilt in September.

Thanks to everyone that I have run with and look forward to running with some of you at the Kintyre way Ultra.