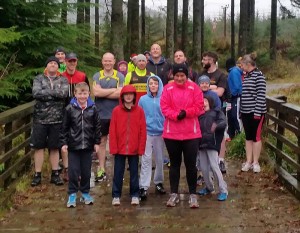 Stretching the limits of the title of “Summer League”, a crowd of Dunoon Hill Runners braved the very non-summery freezing rain for the final, handicap race of the 2014 season on Saturday 6 December. The course had been marked out in Glenkin and started with an uphill push on the trail that’s well-known to most DHR folks, before taking a sharp left into less familiar, and somewhat wilder, enjoyably hilly terrain.

Being a handicap race, runners set out at individual times which were based on their previous season’s performance (these had been carefully worked out by DHR committee members using advanced mathematical skills and a calculator). Inevitably, some runners were “caught” by others who had set out after them , but good-natured camaraderie prevailed. Competitors had been warned at the start to anticipate slippery conditions underfoot, but everyone made it back with no stumbles to report and full dignity intact.

Unfortunately, the persistent rain curtailed socialising afterwards, however, thanks go to Morven, Kirsty and Lynda for thrusting baked goodies into the hands of grateful runners. Thanks also go to Kenny and Ian for organising, and to Morven and Emma for marshalling.

Congratulations to all who have taken part and made this year such a tremendous success! 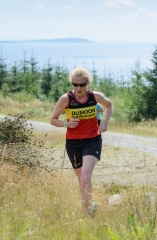