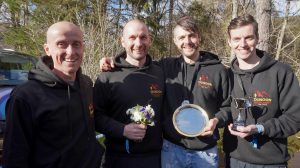 For once the night before the HOKA Highland Fling was a relaxed affair. Between myself and Secretary Kenny, we had the relay team prepared. Emails had been sorted, team legs agreed, registration complete, numbers and instructions given. All I had to do was complete 12.5 miles on leg 1 of the relay then I could settle back and watch the result unfold and cheer on Kevin Nairn and Ricky Reid in the full event. I had publicly stated that I’d be delighted with a top 10 finish while secretly hoping for a top 5 – after all, I had 3 other runners who were strong. Up until seeing Elaine (of Cowal Physiotherapy) the evening before, I was still having doubts about my own fitness, having torn my tensor fasciae latae 5 weeks before, and latterly suffering from ITB issues as a result. I shouldn’t really have been running (having been told to take a minimum of 6 weeks off). However, after Elaine’s specialist intervention, I awoke at 4 am with no pain – a first all week.

Leaving home at 4.30 am, we arrived at Milngavie at 6.01 am and saw the last of the solo runners disappearing. The start line looked quite different with only a hundred or so people milling around, and not the familiar buzz and excitement of hundreds of runners ready to go. 7 am arrived quickly and after checking with Scott Hill, I decided to stick with his brother who was aiming to run a sub 8 minute/mile pace. Given my fitness concerns I thought it wise to run with him and see how long I could hang in.

Seconds before the start horn sounded, I found myself right at the front of 52 other runners, all sense and sensibility seemingly gone and my race brain had taken over. Even as I found myself being pulled along with 4 other runners establishing a quick lead, thinking I’m going to struggle to maintain this and hearing Iain Cairns’ voice telling me his relay team account, I didn’t slow down (my heart rate monitor will confirm this, having peaked at 177 bpm in the first 5 minutes!). It’s amazing, however, that despite fitness and injury concerns, the responsibility you feel for the team overrides everything. I had managed to get to the 10k mark in a shade over 45 minutes, climbing around 500 feet, when I found myself sandwiched between second and fourth place with only around 30 seconds between us. There was no way I was letting this place go and it was as early as then that I thought a podium place was possible given the quality of runners I had waiting in the team. I’d set off hoping to get in under 1:45 and found myself handing over to Roger in 1:34. It’s the first time in any race I have ever done in my life that I was happy with my time.

With no time to waste, Roger was off and, with the thought of the iconic Conic Hill to climb, we headed to Balmaha to pick up Mike to take him to Rowardennan where Roger would hand over to him. Everything was going smoothly and we were enjoying the 11 mile single track journey to the third hand-over point when Mike exclaimed he’d forgotten his watch! Not to worry, we had a spare one (albeit a brighter colour) and duly handed it over. Seconds later, and following a few expletives, Mike proclaimed he’d forgotten his trainers!! A quick u-turn, a little bit of Hamiltonesque driving, shoes collected and we were back on course for Rowardennan.

Upon arriving, we had time to enjoy some of the “extras” put on at the race (OK, I had a massage) while Lisa and Mike helped out at a water station (lol). Just after 2 hours, handing over to Roger, we spotted the distinctive club colours and excitement overcame us again. We had seen the relay teams come in, including one with David Millar (a sub 35 minute 10k runner). It was great seeing Ricky and Kevin (looking forward to their race reports!), quickly followed by Roger. After a slick hand over, Mike set off in fourth place but only seconds behind third. We were still on course for a podium slot. First and second place were at least a good 8 to 15 minutes ahead. Back in the car, we were Beinn Ghlas bound, a good 90 minute drive due to single track and a congested Loch Lomond road. I was beginning to worry I’d miss the last hand over to Grant. With 2 miles before we turned at Tarbet for Beinn Ghlas, Grant was calling. Great, he’s arrived at his checkpoint, I thought. “How far is it from Luss?” Grant asked. Aargh!!!!!!! (and a few other things) passed through my mind. Grant was lost. After he was headed back in the correct direction, I was now stressing that Mike would be standing waiting for him  and the hope of a podium place was dissolving.

After managing to blag the official to let 2 of our vehicles in without a pass, Grant and I got to the hand-over point. Phew, no Mike! The team who had led from the beginning were there – “11 minutes ahead”, one of their runners said. I quickly recognised the yellow vest of the team who were in second and suddenly Mike storming by him on the straight leading to the changeover! Mike had had the run of his life and,with the slickest changeover of the day, Grant was off, leaving only a trail of dust. We were now in second place! We were 13 minutes behind with 12 miles left to run. I turned to the first placed team and said, “That’s just over a minute a mile quicker that we have to go …”. We each looked at one another knowing that potentially a huge upset could be on the cards. My only slight concern was that Grant had no idea what position we were in, yet I knew he was so fired up after his detour and, coupled with his desire to win, I silently believed for the first time we had a genuine chance to win this.

Arriving at Tyndrum, I met Grant’s family and stressed that they should be at the finish for no later than 2 pm as I expected Grant to be in not too much after that. We all assembled at the red carpeted finishing straight, where there were flags, spectators cheering, whistling and cow bells clanging. The digital clock hit 8.00:00 which meant we had been on the course for 7 hours. I’d hoped for a sub 7:30 finish. There was no sign of the first placed team finisher and they were predicting that their runner would come in any minute – then there he was screaming down the finishing straight as though he was running a 100 metre race. The crowds reacted to his effort and speed – yet it wasn’t their runner, it was ours! The bright black, yellow and red of the Dunoon Hill Runners vest was crossing the line! We had just come first in one of the most prestigious ultra races in the UK which was also this year’s host to the UK and Scottish Ultra Trail Running Championships. To top it off, not only did we win, but we overhauled 13 minutes and finished 10 minutes ahead!

Our team, made up of Ian Marshall, Roger Stewart, Michael Tweedley and Grant MacKellar, had each run the race of their lives and brought home a fantastic piece of silverware! 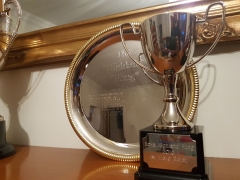 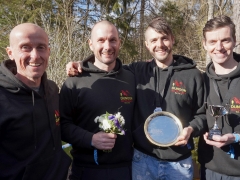 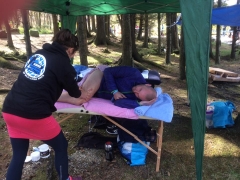 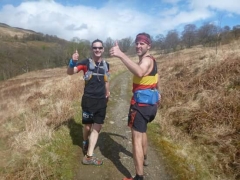 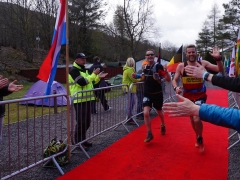 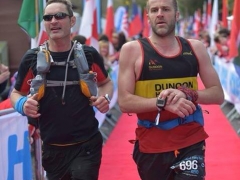 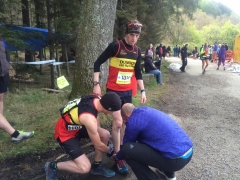 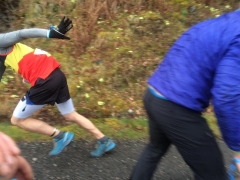 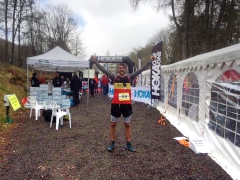 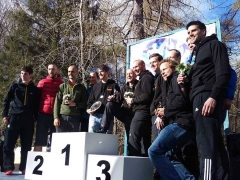 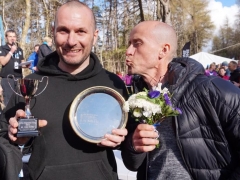