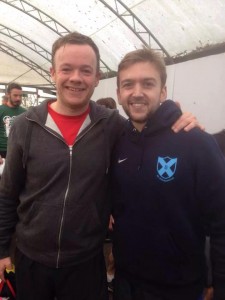 Now in its fourth year, the Southside Six has become something of a Glasgow running institution. The race had intrigued me over the last few years as friends had raved about it. Previously I hadn’t managed to get around to getting a place (I’ve usually still been in my rest phase after a spring marathon – OK, 6 months is a long rest!). Anyway, those pesky friends – some runners and some serial volunteers – recommended that I apply earlier this year when entries went live. I duly followed tweets and Facebook updates in the weeks leading up to entry and quickly learned that the first challenge was to secure a coveted place on the start line. Entry banked, I was amazed to hear that the race had sold out in a matter of minutes – a testament to the reputation and loyal following the race organisers have gained in a few short years.

Fast forward several months and I found myself standing on the start line on Sunday ready to see more of the city than I’d seen in the previous 16 years of living in Glasgow … actually scrap that, the 28 mile Clyde Trail with Jack will still probably be the most I ever see, or want to see, of Glasgow in one day! Me, Jack and Clyde still have a real love hate relationship and it was the sight of the wooden Clyde mascot that welcomed me to the start line in Queens Park.

In essence the Southside Six is a tour of six parks in the Southside of the city (Queen’s, King’s, Linn, Rouken Glen, Pollock and Bellahouston Park). Coming in at 16 miles, the race is a great stepping stone for anyone considering a marathon and offers a good mix of road and trail running with equal measures of tarmac mud and puddles thrown in for good measure. A really well organised event, ridiculously cheap and soup and cakes at the finish line mean this is a race that I will definitely look to incorporate into next year’s calendar.

So, it all sounds too good to be true – well the truth is that the Southside Six is an incredibly challenging run. The golden boy, my pal Jack, said it was the hardest run he’s ever done (to be fair he’s never run one of Kirsty’s legendary uphill slogs in Dunoon but we’ll let that pass). This was a hard slog at times. Departing Queen’s Park (from the flagpole) the route passed downhill into Mount Florida with some hairy traffic dodging on the open roads. Shocked faces showed that other Garmin junkies had flown out the blocks far too fast on the early downhill section.

Climbing out of Mount Florida, the race heads towards King’s Park. Even this early in the race you are conscious that your goal time might need to be re-evaluated to take into account the hilliness of the course – I knew I shouldn’t have worn my Dunoon Hill Runner’s vest, people always think I am going to be good on the hills!

In each park your race number is adorned by happy stickering volunteers – there are six stickers in total, see the theme developing? This led to some hilarious clashes as some runners tried to be “stuck” on the run, not an approach I’d recommend and one that doesn’t permit a cheeky wee breather as you are issued with your sticker.

Leaving King’s Park there was a further ascent up to Linn Park. This was a new one for me but another really incredible green space in the heart of the city. One to visit again at a more leisurely pace in the future. Other than the loveliness my only other abiding memory of this section was the originally themed race feature of the staircase out of the park! The first of several on the route.

A long road section followed next through the leafy suburbs of the Southside and I was delighted to see my former colleague, Emma, a fellow runner who’s had a nasty spate of injuries this season, standing right on cue outside her house. When I say I saw Emma I mean I heard Emma. Man, that girl is enthusiastic. Like enthusiastic off the scale. I felt like Jess Ennis powering down the home straight in the Olympic Stadium. I did spot some of Emma’s more reserved and slightly embarrassed relatives cowering in her porch but she gave a real dose of encouragement early on in the course.

Before entering park 4 of 6 there was another steep climb, this time up the Ayr road. This was getting worse than one of Kirsty’s “small” hill runs where she promises it won’t be that hilly! Rather than miles I was calculating elevation profiles in my head and reckoned there couldn’t be much more climbing from this point onwards.

Back on the flat and going well, I was approaching work turf, Rouken Glen Park. This is where I train the pupils from Woodfarm High School on a Tuesday after work so I know this territory well. Rouken Glen is a great park for trail running and the kids at school enjoy running off the tarmac and getting wet and muddy – the parents who collect them probably don’t appreciate me sharing this passion as dirty trainers clamber into their cars. I really enjoyed the Rouken Glen and then Pollock Park section of the course, miles 8 through 12 by my reckoning. This was the part of the race I still felt quite strong and was well in the groove after a tricky opening few miles. The trail sections in both parks could be miles away from the hustle and bustle of Buchanan Street and the Highland cows set against the backdrop of Pollock House add a touch of Highland gravitas and class not normally associated with an “urban” road race.

Covered in mud, we emerged out of Pollock Park and crossed the M77 for the short transition to Bellahouston Park.

I’ll be honest, Bellahouston Park was rubbish. The race got pretty tough from this point on. To remain positive I got a nice photo in Bellahouston and not much else. Although I actually overtook a Hoka Fling wearing runner – one of those mythical creatures! Maybe Bellahouston wasn’t as bad as I thought! Twelve miles in though on a 16 miler is definitely the death zone. People are slowing and it’s important to keep the rhythm going. So the organisers try their best to accommodate you and put the sticker checkpoint at the highest point of the park, you guessed it – up a set of stairs. There’s something quite head lightening about running up a flight of stairs 11 miles in to a race and it definitely took a while to catch the breath.

The next road section saw the route head back for home turf and Queen’s Park. Loads of shouts for Dunoon (I will collect my royalties cheque for the PR at the Christmas Dinner) or was it ‘that goon’ helped to pass the final miles. 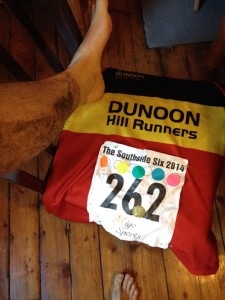 As we approached Queen’s Park I saw my old pal hiding behind the gate – back slightly turned as if he still suspected me of kidnapping his brother and was plotting to exact his revenge on me at any moment. The giant wooden Clyde! What should have been a welcome sight sent shivers down my spine as I thought about our 28 mile cross Glasgow Clyde and Seek adventure earlier this summer. Well this time he let me pass no bother but his revenge was hiding just around the corner. One final staircase where you expect to finish but is cruelly followed by a final climb to the top of Queen’s Park to finish the race in just a smidgen (official race term for 2 minutes) over the 2 hour mark.

Despite the hills and the toughness of the course I would definitely recommend the Southside Six to anyone who is looking to move up the distances on the roads and who likes to get value for money. Post race soup and home baking rounded off a really great event. The golden boy Jack even finished third. Maybe I won’t bring him to one of our races next year after all.