I don’t ever imagine David and Morven Walsh envisaged seeing a mass of Dunoon Hill Runners vests racing across the Carnethy hills when they first entered this race back in 2012. Fast forward some 3 years later, twelve club runners adorned in the now familiar and recognisable red, yellow and black colours were seen racing across the five peaks of the iconic Carnethy 5 2015 hill race.

Five new faces to the race, Bobby, Bryan, Kevin, Kieron and Louise, along with “seasoned” Carnethians, David, Iain, Lisa, Morven, Richie and Ricky (supported by Lynda and family) lined up at the mass start. An expanse of rough, untouched bog-strewn fields sprawled out in front of them before the monstrous hills of Scald Law and Carnethy rose up dramatically from the ground to the heavens. As usual there was a fantastic buzz in the air as around 515 hardy fell runners chatted with excitement, occasionally being drowned out by the sound of bagpipes from a lone piper.

It wasn’t long before the chatter died to a nervous silence as the Chief Marshal gave the well-versed race brief and the distinct bang of the start gun went off! Change the shorts, vests and waist packs into kilts and claymores, one could easily have been re-enacting the Battle of Bannockburn and crying “Freedom!” as the runners set off with purpose towards the first of five tough climbs. The first climb, Scald Law, towering some 579m/1900ft above sea level, is guaranteed to have the calves screaming at you at some point on the ascent and it wasn’t long before the field of runners had filtered into what looked like an army of ants across the bare heather-laden hillside.

Over the 10k course, the ground, soft underfoot, uneven, peppered with ditches, streams, thick matted heather, bog, scree and mud, is a test for any runner. Add in a few wickedly steep descents and the legs soon feel like jelly! Thankfully, this year the course was free of snow and ice so there were fewer Torvill and Dean impressions. Four peaks completed, and just when you think the lungs or legs can’t take any more following a leg breaking descent stretching over a mile to near sea level, you are faced with one last thigh, calf and lung burning climb – Carnethy! At 573m/1900ft in height, it looks every bit as daunting as Scald Law and feels more like Kilimanjaro, yet this last climb has a rather nasty twist. As you reach the top with a sense of relief, up out of the hill ruptures another steep rise to the actual summit and you quickly realise that you are standing on a false summit … Yes I am confident that if ever there was a place to have a swear box, it would be at this point!

Once up and over, the horizon unfolds for miles and looking downwards you can make out the distinctive yellow and red Carnethy flags marking the finish. One last hair-raising, leg busting descent over heather that wants to grapple you to the ground, on to loose scree, then back on to the all familiar ankle-breaking field that we had raced across at the start, and the cheers quickly ring in the ears with fellow runners, supporters and marshals encouraging those tired legs to finish in near Usain Bolt style (well, ask Bryan about that one).

Twelve DHR runners, twelve DHR finishers, and fittingly David led the way for Dunoon finishing in a new PB of 1:07.16 (it would have been quicker except for a bog taking him out at the beginning!). Also worthy of noting, five others achieved PB’s. Ricky and Lisa took a huge chunk from theirs of 9 and 10 minutes respectively, Morven took 4 minutes off of her time from the previous year, and Richie and Iain also gained new records. Of the Dunoon Hill Runners that ran this for the first time, I am confident that continuing the same dedication you have all shown in 2014 and carrying it on into 2015, each one of you will achieve a new PB in 2016!

Well done everyone and I hope to see even more faces at next year’s race!! 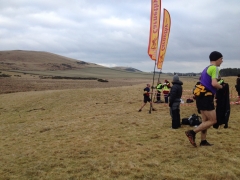 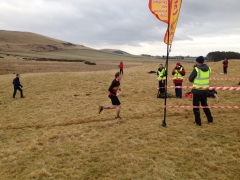 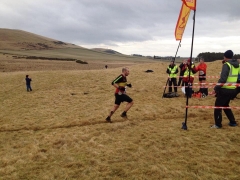 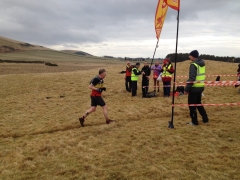 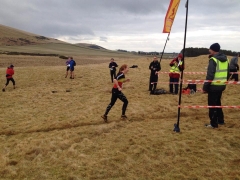 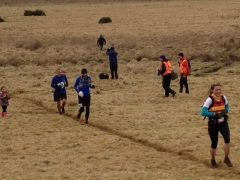 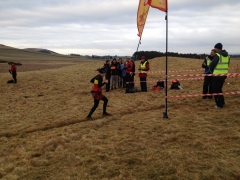 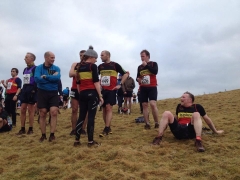 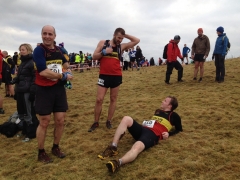 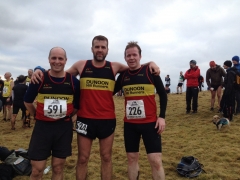